Consumption around the Globe, a look at per capita consumption, waste production, calories, and energy.

It takes the planet 1.5 years to restore what humanity burns through in a year.

Humanity is outstripping the Earth’s resources by 50 percent — essentially using the resources of one and a half Earths every year.

How are we at being stewards of the Earth’s environment?

Dec. 29, 1970: the first time that human consumption outstripped the planet’s capability to produce. Since then the date has been creeping forward each year

How we live: The energy we use

On average, one American consumes as much energy as

In order from most to least, the top 10 greediest resource users per capita are:

Qatar: The worst offenders: the typical resident requires the resources of 6.5X what the earth can produce.

UK: Consumes and produces waste at a rate 3.5 X greater than it can sustain.

China’s total ecological footprint is smaller, per capita, than in Europe or North America but its footprint is the heaviest in the world in raw size, because of its huge population.

Trash Champions of the World

What we eat, and how much:

Kilocalorie: A unit of measurement of dietary energy. One kcal equals 1,000 calories

Americans as a total population eat a total of 815 billion calories of food each day: roughly 200 billion more than needed – enough to feed 80 million people.

Americans have the largest disposable incomes in the world, but that doesn’t mean they’re dropping the most cash on the combined total of consumed food, alcohol and tobacco

159 gallons: The average individual daily consumption of water, while more than half the world’s population lives on 25 gallons.

5 drunkest countries in the world

Other heavy drinking countries include:

Americans, however, don’t drink as much liquor as people from other countries:

2.5 gallons of liquor, on average per person a year 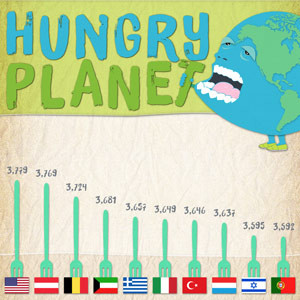 Global Footprint Network provided some of the statistics cited.