International Initiatives: Things to think about when advertising overseas

Orange – a telecoms company – launched a successful campaign in the UK

“Orange” often refers to the Protestant organization, the Orange Order

Seen as hostile and sectarian by Irish Catholics

We all know the “Got Milk?” campaign

It began in 1993 and is still running strong

1998: the “got milk?” slogan was licensed to MilkPEP (National Milk Processor Board) for celebrity print ads

The Spanish version allegedly meant “Are you lactating?”

Being deprived of milk is not humorous

It can be a serious concern for family oriented Latino communities

When Coca-Cola launched in China, many small business owners put out signs that phonetically said “Coca-Cola,” but translated to “Bite the wax tadpole” or “wax-flattened mare”

By using different characters with the same sounds, this could have been “Too purple”

1) Just like English speakers, Spanish speakers acknowledge the word “nova” to be a celestial event

2) When speaking to a mechanic, a person is more likely to say, “no funciona” (it isn’t functioning) or “no camina” (it isn’t running) than “no va” (no go)

The car actually did sell well in Latin America

It surpassed expectations in Venezuela

“Appropriate” or “Inappropriate” varies widely between nations or regions within nations

The Chinese said it insulted their national dignity

China – 2007: (the year of the pig) Advertisements containing pigs were banned

To maintain peace with the country’s Muslim population (about 2%)

France – 2005: the Catholic Church went to court against clothing designers

Designed by Marithe and Francois Girbaud

The court sided with the Catholic Church – the ad was banned

In August 2013, Dunkin Donuts Thailand launched a campaign for the Charcoal Donut

In Thailand, it is common for ads to use racial stereotypes

Some have dismissed the controversy as “paranoid American thinking”

The symbolism of colors varies around the world

In the end, it’s all about research. No amount of financial backing will ever match the value of knowing your audience. 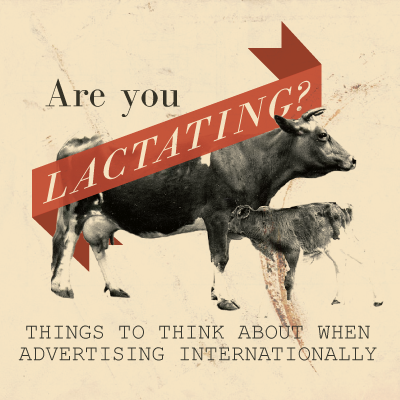