Donald Trump’s business career has been a veritable rollercoaster ride of his own making – as with most Trump-ian pursuits.

Let’s take a look at Trump’s biggest successes and failures in business.

Trump Entertainment Resorts
20 years (1995-2015)
Casino entity has filed for bankruptcy 4 times. Trump resigned from board in 2009 but maintains 28% stock share.

Trump Mortgage
1.5 years (2006-2007)
Predicted by his son to be #1 US home-loan lender. Shuttered amidst housing crash and discovery that top executive had worked on Wall Street for just 6 days.

Which is an excellent baseball batting average.

His failures have an average lifespan of 4.6 years, excluding outliers.

With a median of 4 years.

So how much is Trump really worth?

But this year alone he’s lost more than a dozen multi-million dollar deals.

It’s also not entirely clear Trump’s fortune was made by him at all.

Depending on how much you think he’s currently worth, Trump might’ve made more money by just riding out the S&P Index.

It’s possible he’s even lost a few billion. Though, to be clear, we’re not saying that for certain. (We’re loathe to lawsuits, and Trump’s had a few.)

Either way, it’s a moot point, because one thing is for certain:

Trump still has more money than you. 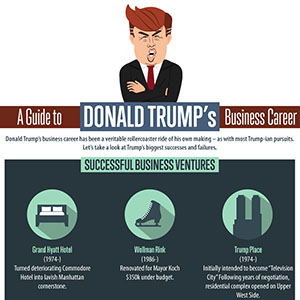