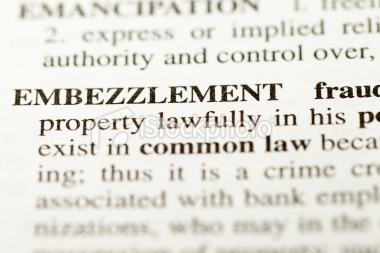 Embezzlement is a type of fraudulent theft in which a trusted person wrongfully takes property or funds. The embezzler tricks or lies to the victim while the goods are being transferred, prompting the victim to transfer the goods to the wrongdoer. After taking possession of the goods, the embezzler uses it for his own goals. Examples of this include: a lawyer stealing money from a client’s account, a man or woman embezzling from a spouse, or a financial advisor taking money from investors. Cases of embezzlement range from minor to severe, largely depending on the type and value of the stolen goods.

Businesses and organizations implement safeguards to protect their property and money from employees or clients. The separation of duties is a defense that makes it harder for employees to steal because they have to collude to do so. For example, retail stores close with at least two employees: a manager and another worker. The manager counts the money from the registers, and the other worker double checks the count. This count is also matched with the registers’ totals.

Another safeguard is moving funds from an entrusted individual to another unexpectedly or on a regular basis. Some businesses hire accountants who are bonded by an insurance policy, which ensures that the company is covered if the accountant embezzles funds or makes a mistake. Implementing independent audits are worth the investment for companies to check their books to prevent and detect any wrongdoings.

Federal and state laws require four factors to be present for an embezzlement charge to be supported. The parties involved must have a fiduciary relationship, which means that one party has to place special reliance, trust and confidence in and is influenced by the other party, who has a fiduciary responsibility to act on the behalf of the party. The defendant has to obtain the goods through the relationship, must take ownership of the goods or transfer it to another party, and has to intend to do those actions.

There are also tax implications for embezzlement. U.S. tax laws require that lawful and unlawful gains are included in gross income. The proceeds do not have to be included in gross income if the money is repaid in the same tax year. If the funds are returned to the victim the following tax year, the embezzler may reduce that amount from their taxable income. If these laws are not followed, the embezzler is charged with tax evasion, which involves fines and/or imprisonment as punishment.

There have been several high-profile cases involving embezzlement. In the 1920s, Italian businessman and con artist Charles Ponzi became well known as a swindler. Through his Ponzi scheme, he promised clients a profit by buying postal reply coupons at a discount in other countries and then redeeming them in the United States at face value. However, he was actually paying early investors with later investors’ money. This went on for more than one year and cost the investors $20 million. He ended up spending three years in jail between 1908-11, 3.5 years in prison between 1920-22 and nine years in jail between 1927-34 before he was deported.

In December 2008, the Madoff investment scandal was revealed. Bernard Madoff, the then-chairman of NASDAQ, confessed that the wealth management arm of Bernard L. Madoff Investment Securities LLC was really a Ponzi scheme. His two sons, daughter and brother were employed at the firm. The size of the fraud is estimated at $64.8 billion. Three years after his arrest, he was sentenced to 150 years in prison and ordered to pay $17 billion in restitution.